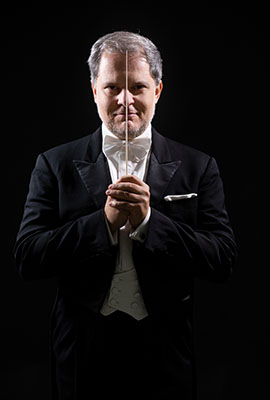 Alessandro d’Agostini, one of the most outstanding Italian conductors of his generation, was born in 1974 and started his musical studies at five. After graduating in piano, conducting and composition as well in computer music, he studied with Giorgio Nottoli (composition for computer music) at Accademia Chigiana, Siena, and with Kostantin Bogino, Tchaikovsky Trio (piano and chamber music). He specialised subsequently in conducting under Piero Bellugi and Massimo de Bernart.

In 2002 he made his operatic debut in Rossini’s Guglielmo Tell (production “As.Li.Co.”, Milan) at Teatro Comunale – Bologna and at the Opera Houses of the Circuito Lombardo. In the following years, he conducts as well other “As.Li.Co.” productions: Gluck’s Orfeo e Euridice, Donizetti’s Elisir d’Amore and Puccini’s Madama Butterfly.

In 2003 he led the Symphonic Orchestra of the “Toscanini” Foundation, Parma in the first modern performance of the “commedia per musica” Lo Matremmonio annascuso by Leonardo Leo on his own critical edition. As a matter of fact, he often combines his conducting activity with musical research, especially in the field of XVIII century opera: we might mention his critical editions and first modern performances of Luigi Cherubini’s Ifigenia in Aulide and Leonardo Leo’s L’Olimpiade.

In 2004 he led the Orchestra Filarmonia Veneta “G.F.Malipiero” in Verdi’s Rigoletto at Teatro Fraschini, Pavia, and made his debut with Il Trovatore at Macerata Opera-Sferisterio and at Teatro Lirico, Cagliari.

In the next years he debuted at Teatro Comunale, Bologna (Leonardo Leo’s L’Olimpiade); at Teatro dell’Opera in Rome in the Summer Season at Terme di Caracalla, conducting Adam’s Giselle, with the choreography by Carla Fracci; he conducted a new performance of Rigoletto (with Jessica Pratt as Gilda) at Como-Città della Musica Festival and of Donizetti’s La Figlia del Reggimento in the Theatres of the Circuito Lombardo (with Yolanda Auyanet and Gianluca Terranova). All these performances were greeted by enthusiastic success from both the public and critics.

In 2010 Mr. d’Agostini conducted L’Elisir d’amore at Teatro Lirico, Cagliari; in this Opera House he came back again for conducting Puccini’s Tosca (2015) and several symphonic performances (the last one, in the Symphonic Season 2016, with music by Ravel and Brahms). In the same year he made his successful debut at Maggio Musicale Fiorentino, Florence, conducting Rossini’s Il Barbiere di Siviglia.

From 2011 to 2013 he was appointed as Principal Guest Conductor at the Macedonian Opera and Ballet: in this Opera House he conducted Tosca, Turandot, Attila, Aida (with Vladimir Galouzine as Radames), Lucia di Lammermoor, Il Barbiere di Siviglia, La Traviata (with Irina Lungu in the title role). In 2012 he debuted at Auditorium de Tenerife in Mozart’s Die Zauberflöte.

In 2016 he conducted the “première” of the opera Notte per me luminosa by Marco Betta, at Teatro “Pavarotti”, Modena, and Teatro Chiabrera, Savona.

He is often invited as guest conductor in Russia, conducting concerts with the State Symphony Orchestra “Novaya Rossiya”, the Moscow City Symphonic Orchestra and the Saint Petersburg Academic Philharmonic Orchestra. We remember, among other, the successful performances of Orff’s Carmina Burana and Mussorgsky’s Picture at an Exhibition at Grand Hall of Moscow Conservatory and many symphonic concerts given at the International House of Music, Moscow, or in Moscow Cathedral.