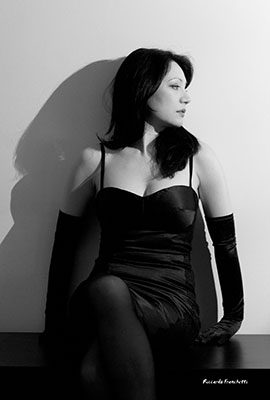 Born in Rome in 1979, she completed her violin studies in 2002 ,singing in 2003 at the G. Verdi Conservatory in Milan, with the highest marks and honors. She completed her studies at the Accademia del Teatro alla Scala in Milan, obtaining a specialization diploma and participating in some productions of the Teatro alla Scala (including Otello directed by Riccardo Muti). She specializes in artistic Vocology (high education) in 2016-2017 at the University of Bologna with Doctor Franco Fussi and in clinical vocology in 2018-2019 at the Nuova Artec in Milan with Doctor Silvia Magnani. In 2020 she is among the first winners of the Master in Artistic Vocology, medical area at the University of Bologna. In 2013 she founded the “Belcanto Academy” ( High education for singers and pianists) in Finland and in 2017 she also brought the academy to Italy in Trentino with the support of the Autonomous Province of Trento. In both Academies she is professor of Vocal Technique and Artistic Director.

She debuted in 2001 and won the prize for young talents of the International Competition “Debut in Meran” which allows her to work for the Operastudio of Merano and debut some important roles in Italian and German theaters, including Micaela in Carmen, Susanna in Nozze di Figaro, Marcellina in Fidelio, Pamina in Magic Flute, Eurydice in Orpheus, Mimì and Musetta in Boheme.

In 20 years of career she has debuted many roles, among the most important: Violetta in Traviata at the opera of Riga, Rosina in Barbiere di Siviglia (Teatro Sociale of Trento), Serafina in Donizetti’s Campanello at the Teatro nuovo in Torino, Adina in the Elisir D’amore in Trento and Bolzano, Cio-Cio-San in Madame Butterfly for Pergine Spettacolo Aperto, Norina in Don Pasquale As.Li.Co in various theaters of the Lombard and Trentino opera circuit and the Mikaeli theater (Finland) , Lucia in Lucia di Lammermoor at the Opera di Tirana in co-production with Maggio Musicale Fiorentino; Emily at the Teatro Massimo in Palermo in G.Menotti’s opera “Help Help the Globolinks”, Nedda in Pagliacci Teatro Filarmonico di Verona Fondazione Arena, Lauretta in Gianni Schicchi and Susanna in Il Segreto di Susanna at the Teatro Verdi in Trieste.

Also specializing in mozartian repertoire was Tamiri in Il Re pastore at the Verdi theatre in Trieste and Dorella in Wagner’s Das Liebesverbot co-production with the Bayreuth Festival and the Leipzig Opera. From 2012 to 2017 she was a regular guest at the Teatro Filarmonico in Verona and in the summer season of Arena di Verona where she recorded Carmen (as Frasquita) for Sky Classica in 2014 and for Rai 1 (” The show is about to begin conducted by Antonella Clerici).

Since 2010 she has collaborated with the Mikkeli Theatre, Finland where she is often a guest.

Among the recent concert appearances, she was invited by the Latvian Philarmonic Chamber Orchestra, the Orchestra 1813 of the Teatro Sociale di Como (also inaugurating the Santo Stefano Festival in Bologna), I solisti Veneti, the Mikkeli City Orchestra (among which we remember the New Year’s Eve 2016 concert) obtaining a great success of public and critics and a lucky tour in the United States in 2019.