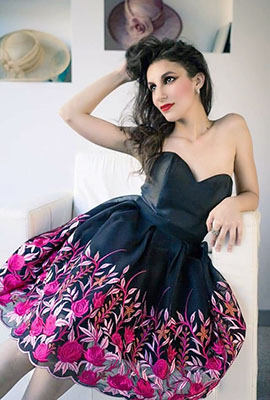 The soprano Leonora Gennusa from Sicily completed her higher education in Tuscany, graduating in Language and Literature from the University of Florence and in Opera Singing from the Luigi Cherubini conservatory in the same city. Following this, she continued her studies and specialization under the guidance of Luciana Serra, Liliana Poli, Mirella Freni, Manuela Meneghello, Susanna Rigacci and Barbara Frittoli. She is currently refining her vocal and theatrical skills with the baritone Federico Longhi.

She embarked immediately on a musical career, ranging from baroque to contemporary opera, working with the Accademia Musicale della Valtiberina and taking part in opera festivals, giving theatre performances in opera productions and concerts. In 2013 she performed at the Sorbonne in Paris and at the Cité del Arts theatre, as Vannella in a selection from “Lo Frate ‘nnamorato” by Pergolesi. The following year she returned to Paris to perform in both the operas entitled “La Serva Padrona”, by Pergolesi and by Paisiello. In the same year she sang in the Mozart opera “La Finta Semplice” in the role of Giacinta and for the opening of the new Teatro di Budapest as Belinda in “Dido and Aeneas” by Purcell. Following this, she toured Tuscany singing in the same role.

In 2015 she sang in the operetta “Die Fledermaus” by Johann Strauss in Florence at the Teatro Comunale, the Teatro Verdi and the Accademia delle Belle Arti. The same year she took part in the Accademia Internazionale at the Teatro Lirico in Cagliari and at the Parco della Musica in Rome, after which she gave performances in recitals of Arias from the Bel canto repertoire.

In 2016 she made her debut as Despina in “Così fan tutte” and sang in “Fra Diavolo” by Auber at the Teatro dell’Opera in Florence. She then debuted as Pamina and Papagena in “The Magic Flute”, singing at the Teatro dell’Affratellamento in Florence and the Teatro di San Casciano, as Vannella in “Lo Frate ‘nnammorato” by Pergolesi at the Guardiagrele Opera Festival and Zerlina in Mozart’s “Don Giovanni” at the Centrum Filarmonie theatre in Zlin.

In 2017 she sang in several concerts in Salzburg, performing works ranging from Mozart to Puccini   in cooperation with the Assocazione Mozart Italia and Mozarteum.

On May 9th she performed at the Teatro dell’Opera in Florence for the state broadcasting company: Rai Televisione Italiana and Rai Parlamento, for the Alion Baltic Festival Tallinn in Riga and Helsinki, winning first prize in the Baltic Festival International Competition. Following her performance at the Festival del Belcanto in Montisi, she took part in Roma Opera Campus in a project directed by Barbara Frittoli.

In 2018, she sang at the Go Festival Abruzzo as Serpina in “La Serva Padrona” by Pergolesi, in a project directed by Susanna Rigacci. She also sang at Liminka and Hailuoto during the Hailuoto Finland Festival and at Vicenza in Lirica, accompanied on the piano by Richard Barker, under the direction of Barbara Frittoli.

In 2019 she sang the leading role in a major orchestral concert with the Serbian Youth Philharmony Naissus of Niš (Serbia) conducted by Zoran Andric. She also sang in Florence, Venice, La Spezia, Modena and other Italian cities in opera, concert and chamber music performances.

In 2020 she performed in concerts, galas and theatres where she debuted the roles of Berta in Barbiere di Siviglia, Kate Pinkerton in Madama Butterfly and Musetta in La Bohème. At the end of December, she will perform at the “Festival della musica per le Terre Sicane” in a live stream concert.

In 2021 she is expected at the Belloni Opera Festival (Musetta in La Bohème) and Teatro Rossini in Civitanova Marche (Giannetta in L’elisir d’amore). In June she will sing in the Verdi Requiem under conductor Marco Beretta to commemorate the victims of the pandemic (in Piacenza, Busseto and Parma).